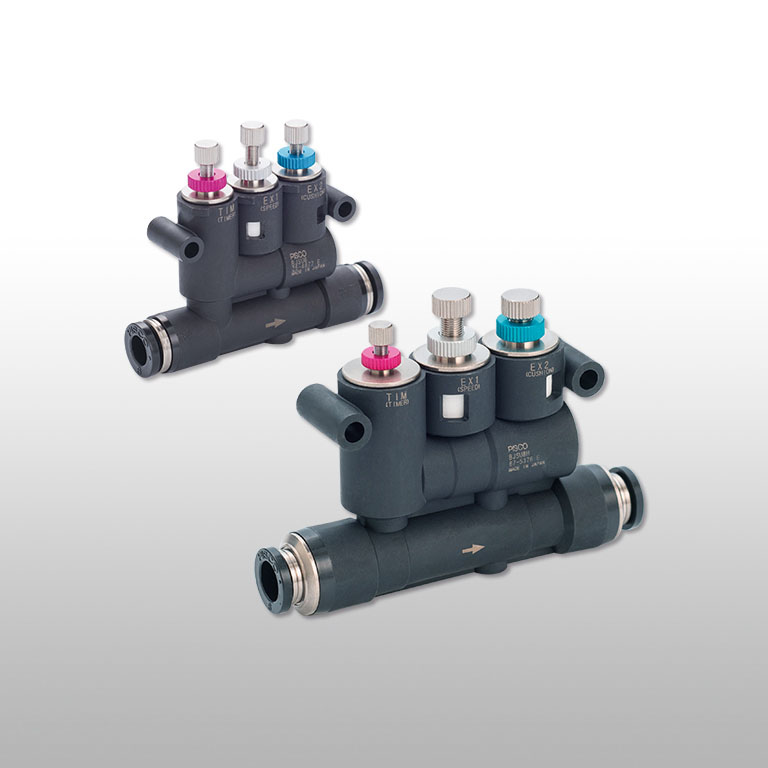 Industry's First!
It enables same control as the cylinder with shock absorber. (Patent no. 5578502)

Industry's First!
It enables same control as the cylinder with shock absorber. (Patent no. 5578502)

Shock absorber is not required.

Two-stage exhaust flow rate adjustment is realized. By using 2nd stage exhaust speed to be as cushion (brake), controlling like a shock absorber is possible.

e.g. Can be reduced the shock to 1/9 while keeping the same cycle time.

Durability is about 3 times of a cylinder mounting type shock absorber.

Durability of BJSU is more than 3 times of a normal shock absorber, which is directly mounted on a cylinder. Thus, reducing the cost and the frequency of the maintenance are possible.

1.When adjusting the speed of the cylinder, refer to the speed adjustment method in the digital catalog or instruction manual. If the correct procedure is not followed, there is a risk of the cylinder moving violently.

1.When adjusting the flow rate of the equipment, the needle should be turned to open gradually from the fully closed position. If the needle is in open position, a high flow rate will be instantly applied to the equipment and there is a risk of damage to it.

2.Leakage is allowed for the control flow even when the needle is fully closed position and should not be used in such a way that zero leakage is required.

3.Note that while air remains in the cylinder during the second speed transfer, the cylinder thrust will be reduced due to back pressure.

4.Air leakage around the cylinder may affect the speed setting.

5.Do not block the exhaust ports during the adjustment and operation.

8.Depending on the setting of EX1 or EX2 and various conditions such as the supply air pressure, the back pressure of the exhaust air may cause the main valve to chatter momentarily and generate abnormal noise.

9.In the exhaust side control mechanism, the material of the needle mating part is resin. If the needle is tightened with more torque than required, the resin mating part may be deformed and the flow characteristic may change.

Inquiries about this product

It is also possible to suggest products suitable for various conditions such as applications and functions. Please feel free to contact us or visit the nearest sales office.